Skip to main content
Go to accessibility notice
Loading...
There are currently no items available for purchase in this Department. Search our Auction Archives below to find item values.
LOT #50786  |  Sold for: Sign-in or Join (free & quick) 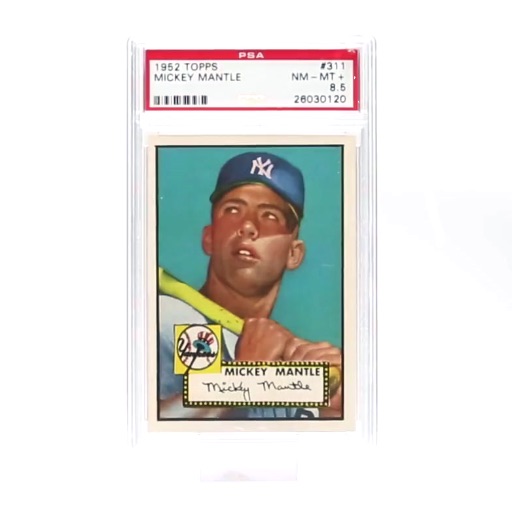 1952 Topps Mickey Mantle #311 PSA NM-MT+ 8.5. It seems impossible that it has already been twenty years since the world lost Mickey Mantle, who succumbed to terminal liver disease at Baylor University Medical Center on August 13, 1995, just a few miles from the world headquarters of Heritage Auctions. The passing of any immortal is always a shock, but the man had been so emblematic of his era, so firmly tethered to an America as seen through the eyes of the Baby Boomer generation, that his death seemed like the signal of an end of far more than a human life. American idealism itself, it felt, had been dealt a heavy blow.

And so, today, the distance between supply and demand is nearly as vast as the Atlantic Ocean that serves as the final resting place for most of the original population of this iconic trading card. Nowhere is this more true than at the upper reaches of the PSA population chart, where we find ourselves near the start of a soaring pricing boom that has elevated NM-MT 8 examples beyond the half-million dollar threshold in our previous two offerings.

The extra half-point earned by this spectacular specimen reduces the field of equivalent or superior examples by nearly three quarters. Forty-four examples of this card have been graded PSA NM-MT 8 or better. But this NM-MT+ 8.5 is one of only twelve to soar as high--three at this grade, six Mint 9's, and three Gem Mint 10's. In a full PSA population of 1,392, the rating places this card within the top fraction of one percent.

Remarkably, this nearly pristine relic is a new resident in the hobby's most recognizable slab, delivered raw to the Heritage booth at the National Sports Collectors Convention in early August of this year and graded by PSA on-site.

How could this be?

The card derives from the famous "Rosen Find" of pristine 1952 Topps cards that turned the hobby upside down in the mid-1980's. Since then, it has lived a lonely, uneventful life, aging as little in its post-Rosen days as it did in its pre-find existence.

Beyond the stunning lack of wear, the card boasts the boldest hues we've encountered from the entirety of the 1952 Topps breed, an attribute that must be seen in person to be truly appreciated. Centering is well within desirable parameters, and surfaces are as clean as an operating table. The margin of difference between this example and the multi-million dollar trio at the top of the population pyramid is nearly too small to perceive.