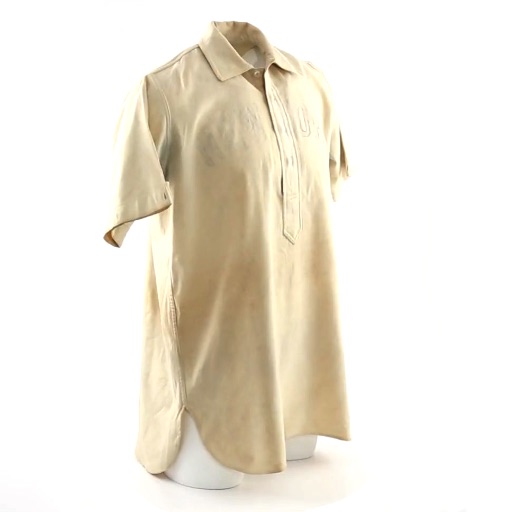 View More >
Sold on Aug 27, 2016 for:
Not Sold
Get one of these:
Explore Available Items
Share this lot
Track Item Printable Auction Results
Sell One of These Currency Converter
Description
Auction Info
Guides & Info
Explore

1904 Christy Mathewson Game Worn New York Giants Jersey.
In the rough and tumble Dead Ball Era of our national pastime, when the sport was populated by brawling drunks and illiterate farmhands, Christy Mathewson was recognized almost as much for his gentlemanly comportment as he was for his remarkable Hall of Fame abilities. As commissioner Kenesaw Mountain Landis famously eulogized the fallen baseball hero in 1925, "He was an inspiration to everybody, and may we have more of his kind."

And, certainly, great men have followed in Matty's footsteps-Ruth with his extraordinary kindness to America's youth, Gehrig with his quiet strength, Robinson with his brave and principled stand against bigotry. But it would be difficult to argue that any player in the first half century of the professional game elevated it quite as profoundly as this inaugural class Hall of Famer, American sports' prototypical blue-eyed boy.

This Platinum Night auction will close within weeks of the centennial of Mathewson's final pitching appearance, the last of a staggering tally of 373 Major League victories, third best in baseball history. The September 4, 1916 contest against fellow pitching legend Mordecai Brown would likewise prove to be the last game of Three Fingers' career. And in that century that has elapsed since that battle of aging titans, only a single example of Mathewson's game worn jerseys has appeared at auction to tempt the upper echelon of the collecting community.

Heritage Auctions is honored and privileged by the opportunity to present that garment here.

Even the jersey's singular status fails to fully contextualize the rarity and importance of the offering. Major League uniforms from the Dead Ball Era are exceptionally scarce. Consider that Heritage Auction baseball memorabilia archives reveals well over 2,000 entries containing the search term "game worn jersey." Only five predate the year 1920.

This extraordinary, improbable survivor derives from one of the greatest seasons of Christy Mathewson's seventeen-year playing career, one of only four that saw Big Six record thirty-plus victories. The Giants ace led the National League with forty-six starts in 1904, winning thirty-three while posting a microscopic 2.03 earned run average. Mathewson's 212 strikeouts likewise set a Senior Circuit benchmark, one of only four seasons during which he would surpass 200 K's. The New York Giants would run away with the National League pennant in 1904, leaving Tinker, Evers and Chance of the Chicago Cubs thirteen games in their wake.

Our ability to definitively assign vintage to this glorious garment is attributable to a remarkably fortunate convergence of period tailoring and photography. Just as Mathewson was laying claim to his role as the Big Apple's leading sportsman, another rising star was making his mark on the early twentieth century game. It was in 1904 that a young proofreader for New York City's The Evening Telegram newspaper transitioned to the role of sports photographer, building a portfolio of thousands of images that today serve as the most significant visual record of the Dead Ball Era. The original negatives of the Charles M. Conlon photographic archive appear within this Platinum Night auction.

Often identified as Conlon's first published baseball photograph is a towering 1904 portrait of Mathewson in his wind-up that finds the twenty-four year old right-hander wearing a jersey identical in every regard to the offered representation. While the block-lettered "New York" format was standard issue from 1900 through 1904, only in that last season before the transition to the large "NY" model did the button placket conclude at a triangle bottom. Note that the top of the button placket likewise is triangular in shape, rather than flat, perfectly linking the jersey and the photo.

While the "New York" identifiers have been removed, a practice quite common in vintage flannel jerseys, the dye pattern remains readily visible, and again never diverges from the Conlon image. The button holes for the extendable sleeves (which are included!) are apparent in the photograph, once again a precise match in placement and format. We can state without any reservation that the offered jersey and that which Mathewson wears in the photograph are one and the same.

Further dye bleed appears at armpits, the result of wearing a dark undershirt beneath, and in the tail area, presumably from the dye of the belt. Not visible in the photograph is the proper "Spalding" manufacturer's label at interior collar, and a handwritten "(3)" to its right, a notation which we speculate to have been applied by a Polo Grounds clubhouse staffer for inventory purposes. Beyond these welcome period alterations, the jersey presents without any distractions of significance, its MEARS A5 rating attributed entirely to the five-point deduction for the removed team identifier.

Beyond the unfailing fidelity to the famous Conlon photograph, the provenance of this elite early baseball treasure is validated by a 1992 letter from Louise Sisk, whose late husband was a first cousin of Mathewson's mother. The Factoryville, Pennsylvania home in which she lived for over a half century at the time the letter was written had been built by the Mathewson family.

Excerpted from the letter written when the jersey was sold to one of the hobby's leading collectors:

"In the early 1900's Christy Mathewson used to return to Factoryville in the off season and bring to the children his old uniforms and equipment. Christy gave to my husband a New York Giants uniform on one of his first return trips. My husband kept this uniform as well as other equipment in our attic, where it has been for the last 90 years."

Now, over a century after a young National League Champion made his triumphant return to his hometown with this jersey in his luggage, the global collecting community is offered its very first opportunity to compete for ownership. No superlative seems a worthy descriptor of the enormity of its importance. Those who would argue that this is the most significant game used jersey ever to take its turn upon the hobby's auction block would come to that debate well-armed. LOA from MEARS, A5. Letter of provenance from Mathewson family. Charles Conlon photo match. LOA from Heritage Auctions.