Skip to main content
Go to accessibility notice
Loading...
There are currently no items available for purchase in this Department. Search our Auction Archives below to find item values.
LOT #56059  |  Sold for: Sign-in or Join (free & quick) 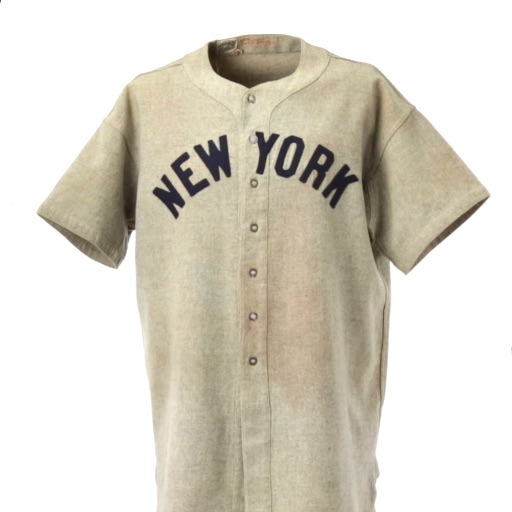 One of the most thoroughly documented Gehrig jerseys known!

1937 Lou Gehrig Game Worn New York Yankees Jersey with Photo Matches to Two Different Home Run Games, MEARS A9 & SGC Excellent. He may have spent the bulk of his baseball career in the shadow of the sport's most celebrated figure, but after the two million fan ballots were calculated to determine the Major League Baseball All-Century Team in 1999, it was Lou Gehrig who took top honors, claiming 1,207,992 votes to Babe Ruth's second-place 1,158,044. While the Babe's career stats may be slightly more garish, and his public persona undoubtedly so, Gehrig's electoral victory here should be considered neither unexpected nor unmerited. As baseball is the most thoroughly American sport, so should the calculus for baseball greatness be informed in part by those traits that represent the best of our national character: bravery, reliability and quiet strength. And no ballplayer in history held these attributes in greater supply than Lou Gehrig.

Gehrig's character and brilliance, both essential in the New York Yankees' elevation to the pinnacle of baseball's hierarchy, have properly fueled intense demand for mementos of his career, while his modesty and untimely passing have served to thwart supply. Of residents in Yankee Stadium's Monument Park, only the autograph of manager Miller Huggins, likewise felled by sudden illness, is a greater challenge to collectors. And despite his staggering attendance record, game used material from Gehrig's career eludes all but a small, elite brotherhood of collectors. Fewer than ten jerseys from his seventeen years of service are known to exist today.

Here we present one of the very finest from that endangered species, worn during the last great season of the noblest Yankee of them all. While Gehrig would continue his fabled streak through the 1938 campaign, he'd lead the American League only in appearances during that last full season, his declining numbers now understood to have been a canary in the coal mine of his terminal illness. But in 1937, the stalwart first baseman was still the most feared slugger in the sport, batting .351 with thirty-seven homers and 158 runs batted in, and leading the Junior Circuit in walks (127) and on-base plus slugging (1.116), the latter arguably the most significant metric of offensive effectiveness. For the second consecutive season, and the fifth time in his Hall of Fame career, he'd help bring the World Championship home to the city of his birth.

The garment is accompanied by a ream of documentary paperwork that will be made available in its entirety to serious bidders who make a request, as it is too substantial to post in full on our website. We'll address the key points here, beginning with the confirmation that this jersey remains in 100% original and unaltered condition as worn by Gehrig, with any deviations from factory standards implemented either by the Yankees or Gehrig himself. The letters reference a repaired tear running vertically from the collar to the right of the number "4" on verso, identified as the result of clumsy removal from a locker room hanging hook. Eyes will also be drawn to the hole at the left armpit, and the light stitching that repairs the same at right. This crude surgery was Gehrig's answer to the misery of wearing heavy flannel during the dog days of summer, and we can see this alteration in period photography of Gehrig, including a great August 29, 1937 shot of him standing between Hank Greenberg and Joe DiMaggio in Detroit while wearing this jersey.

Otherwise, we find not a button or seam out of place, the jersey spared the indignity of secondary farm club usage that was the fate of most Big League gamers of the day. "New York" gently arcs across the chest in navy felt, applied with the same stitching pattern that affixes the sacred number "4" on verso. Interior collar is tagged "Spalding [size] 46" beside an artfully chain stitched "L. Gehrig," mellowed by sweat and the passage of decades from red to a lovely salmon shade. We see the same effect with the "37" embroidered at interior rear tail. Game wear, to no surprise, is strong and consistent, exactly what would be expected of a jersey belonging to a man who personified those adjectives to the fullest.

The jersey entered the hobby through the grandson of a friend of Yankees general manager George Weiss who commonly attended games at Yankee Stadium as his guest. It has since been matched to multiple photographs of Gehrig in action, most notably two different games in which the superstar slugger recorded home runs. No other Gehrig jersey has been similarly documented.

Both home run photo matches appear as original Type 1 images in this Platinum Night auction, the first being Lot 56464 (our catalog cover image), finding Gehrig completing his circumnavigation of the Fenway Park diamond after taking Red Sox ace Bobo Newsom deep with a three-run shot in the top of the first inning in the bottom half of a doubleheader on August 11, 1937. The second home run contest is twice documented in photography, first in the aforementioned posed image with Greenberg and DiMaggio, and another captured the same day as Gehrig crosses the plate and accepts the congratulations of the star-struck bat boy following another first inning three-run blast. That photo appears in this auction as Lot 56463.

Included paperwork from Resolution Photomatching provides close-up imagery of the button placement in relation to the letter "Y" on Gehrig's chest, supplying ironclad documentation to support these contentions. Certainly there is no reason to believe that the home run history of the garment chronicled here is comprehensive-with two home and two road jerseys issued per season, simple probability would assign approximately a quarter of Gehrig's season tally of thirty-seven to this Cooperstown-quality relic.

The elite significance of any Gehrig garment, the rare, unaltered condition of this specimen, and its photo-documented connection to two separate three-run homers, establishes this extraordinary piece as one of the most significant to tempt elite collectors in recent memory. It's an investment-quality artifact representing the absolute best that the hobby has to offer. LOA from MEARS, A9. LOA from SGC, Excellent. LOA from Resolution Photomatching. LOA from Heritage Auctions.