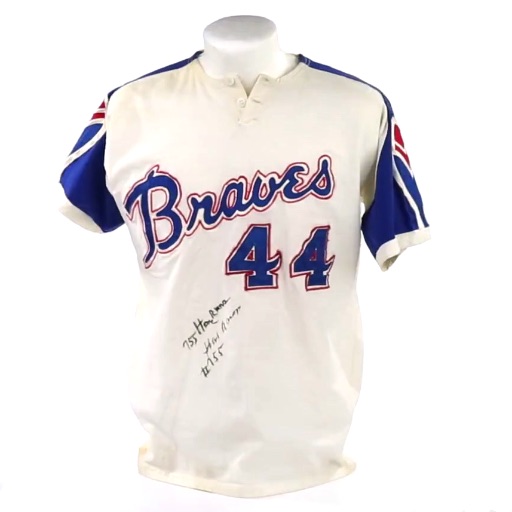 Part of the reason for Aaron's remarkable numbers was his conditioning and durability, which allowed him to maintain an exceptionally high level of excellence over his entire career and extend his prime further than the other stars of his day. Aaron was a much more productive player from age thirty-one onward than either Mantle or Robinson and from age thirty-five onward than Mays. In his five seasons from age thirty-five to thirty-nine, Aaron averaged forty home runs, 101 runs batted in, and hit .300.

The jersey on offer here is from the strike-shortened season of 1972. Defying age, death threats, doubters, and tremendous physical and mental pressure on a daily basis, Aaron smashed thirty-four home runs at age thirty-eight, to push his career total to 673 and move ever closer to baseball's most revered number: Babe Ruth's lifetime total of 714 home runs. During the 1972 campaign, he also surpassed 2,000 runs batted in and became the all-time Major League leader in total bases.

This predominantly white knit has a two-button neckline (with satin eyelet reinforcement), which was only worn on this style during the 1972 season, and
blue sleeves with fabulous decorative feathers sewn on. "Braves" is scripted on the diagonal with Aaron's identifying "44" offset below and to the left in double-sewn-on blue and white tackle twill, with embroidered red trim. The "4"'s are closed and particularly ornate with upward ending serifs. The verso displays "44" in that same beautiful font, except much larger. There are three important tags residing in the back collar: A Sand-Knit exclusive tag, a Sand-Knit "size 44" tag, and a rectangular, cream-colored felt swatch with "Aaron Set 3 72" embroidered in blue thread. In fact, there are photos from this year which clearly show triple, back-collar labeling.

The 1972 season was a transition year for most MLB uniforms because teams were switching from flannels to knits. As such, there were certain issues which arose with this new fabric in regard to wear, washing and fit. The Braves had nightmarish problems with shrinkage and discoloration in this transition year to knits and, as a result, the team switched to dry cleaning its jerseys. Things were further complicated when a fire in the dry cleaning plant the Braves employed resulted in many of the 1972 jerseys exhibiting burning or browning. Evidence of that fire can be seen on this very jersey which has light browning on the neck, back and side.

There are three additional pieces of evidence which support this is an extra jersey which was numbered and tagged for Aaron because of shrinkage and discoloration of his previous jersey sets: (1) The size "44" indicates that shrinkage was a worry because Aaron traditionally wore a size "40" or "42." (2) "Braves" is sewn onto the jersey with Swiss-embroidered stitching done at the factory, while the "44" on the front and back were put on with straight stitching done locally, which indicates the numbers were affixed later. (3) The bottom of the felt swatch (1.5x4") in the collar has come loose from the jersey revealing a blank felt swatch (1x2.75") sewn in underneath, which would have been consistent with an extra jersey. After the jersey was numbered for Aaron, the felt swatch with "Aaron Set 3 72" (the correct stitching, color, letters, and numbers for that period) was produced and placed over the blank one.